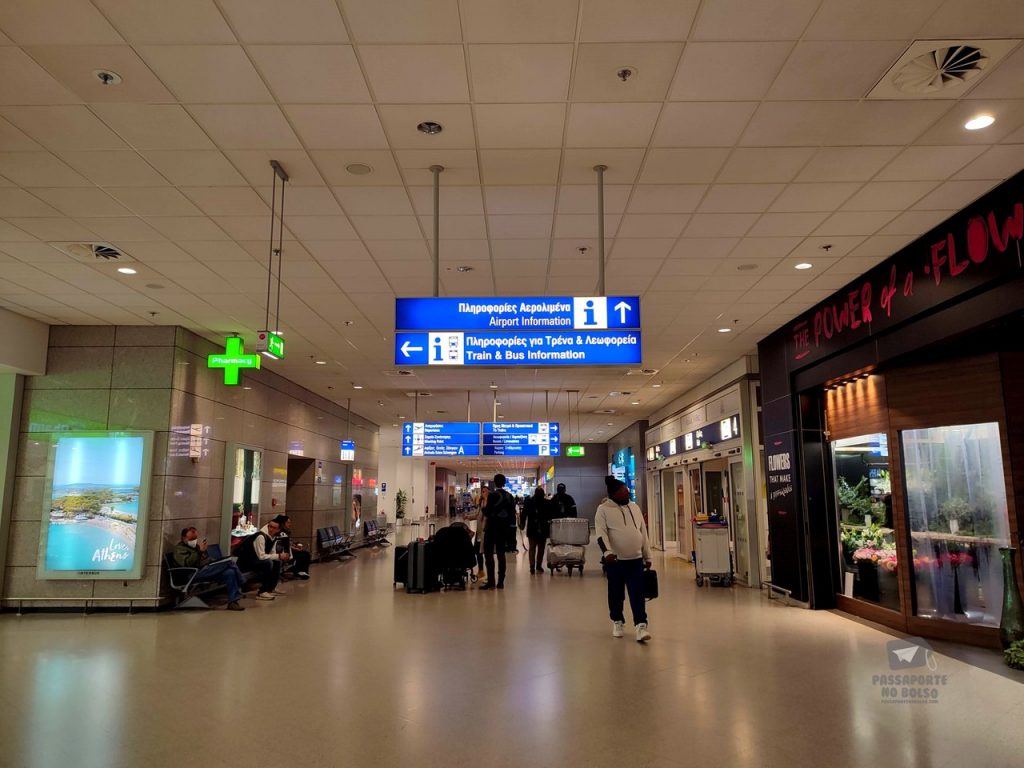 So, if you are flying from an europena airport towards Athens, you have no other airport than this one to use.

I have put together some information about Athens International Airport to help you plan your trip.

Athens International Airport (ATH) is the primary airport serving Athens, the capital of Greece. There are several major airlines that operate flights from ATH, including:

Other airlines that operate flights from ATH include Air France, Alitalia, KLM, and Swiss International Air Lines. The airport also serves as a hub for several smaller regional and charter airlines.

How to get from Athens International Airport to the city center?

Athens Airport is located in Spata, ie about 33 km from Athens. There are several options for getting from Athens International Airport to the city centre.

Let’s see each of these options to get from Athens Airport to the center.

Metro: The airport is connected to the city center by metro line 3 (the Blue Line). The metro runs from 6:30 am to 11:30 pm and the journey to the city center takes around 40 minutes. You can take the metro from the airport terminal and get off at Syntagma Square, which is an important point in the city centre. A single ticket costs 10 euros.

Taxi: Taxis are usually expensive, but very convenient, especially if you are traveling with a lot of luggage. A taxi ride to the city center takes between 30 to 45 minutes, depending on traffic. In this case, count on paying more or less 35-45 euros, which can even compensate if you are a group of four people.

Private transfer: I must say that I often use this service, especially if the flight is at night. It’s a little more expensive, it’s true, but I don’t have to worry about getting lost in my destiny. This is because when I get off the plane someone is waiting to take me to the hotel. Do a simulation of the private transfer here.

What are the main rent-a car companies at Athens Airport?

There are also several local rental car companies that operate at ATH, including Auto Union, Autohellas, and Olympic Rent a Car. Most of these companies have desks or kiosks in the arrivals area of the airport, and some offer a shuttle service to take customers to the rental car lot.

It is very easy to find the rental car companies, as they are located in the arrivals area of the Main Terminal. However, I recommend that you book your rental car in advance, so as not to be surprised on arrival.

The fact is that, especially in summer, the most economical categories of rental cars tend to sell out, leaving only the most expensive cars available.

Take a look at rental car prices at the link below and make sure you have a car when you arrive in Athens.

Book a rental car in Athens

If you have a very early flight and want to sleep until the last minute, consider staying overnight in a hotel close to the hotel.

Right in front of Athens Airport you have the Sofitel Hotel where you can have a good night sleep. But don’t think this is your typical airport hotel.

It is a five star hotel with everything you would expect from a hotel of this kind.

Is there free WiFi at Athens International Airport?

Yes, Wi-Fi is free at Athens Airport, but only for 60 minutes.

How many airports are there in Athens?

There is only one airport in Athens, Athens Eleftherios Venizelos International Airport (ATH). In addition to serving Athens, the capital of Greece, it is close to cities such as Piraeus (40 km).

What are the Greek islands with an airport?

In total, Greece has 39 airports, several of which are on the islands. Thus, and taking into account the usual destinations of the european, the main islands that have an airport are Mykonos, Santorini and Chania.

*I traveled to Peloponnese at the invitation of Turismo do Peloponnese, and in the context of TBEX Europe 2023, which will take place in Kalamata between May 8th and 11th, 2023. Stavroula Gkeka from Penguin Travels and Tours accompanied me on this trip and It was an essential help. Of course, there is still a lot to see, so I intend to return to the region soon.

PrevPreviousDiscover the Charm of Nafplio: A Guide to the Top Attractions and Activities
NextKapsia Cave: Explore the wonders & fascinating geology of Kapsia CaveNext